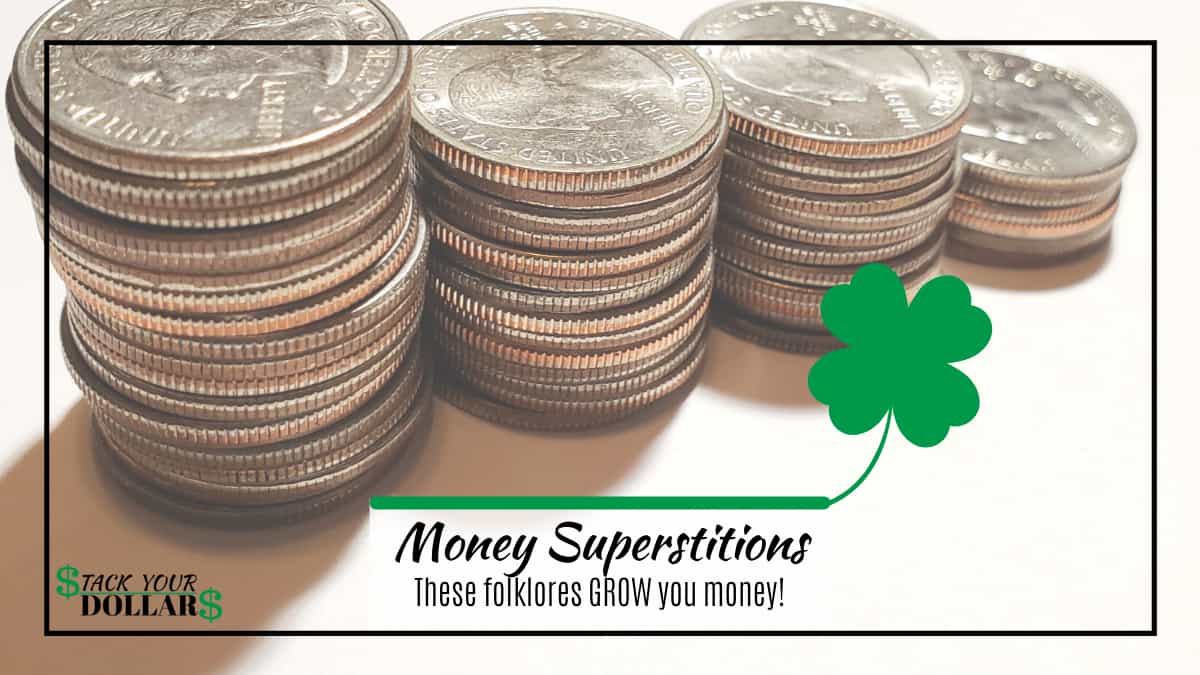 There are many strange money superstitions around the world that are said to mean that you will have great fortune coming into your life. These superstitious beliefs in money are passed down from generation to generation and spread all across the planet.

That makes it hard to know where exactly these signs of wealth originate from. But also, it means that many different cultures will have similar beliefs and superstitions about money that vary slightly.

Do you share the following money beliefs? Or are they different from what you know of?

This post may contain affiliate links as a way to support the costs of this website (at no additional cost to you); however, I won’t recommend products I don’t believe in. View my full disclosure at the bottom of the page.

1. Putting your purse on the floor

According to Feng Shui, it’s considered bad luck to put your purse on the floor and you will lose money if you do so. It’s disrespectful if you place your money in such a place and must signal the universe that you don’t value it.

Think about it though; the floor is full of germs! Why would you want to put something you touch all the time there anyway?

However, now I know that the lucky hand for each person is different. Some people can also attribute this itchy palms superstition to winning the lottery. You can also enhance your luck by having someone scratch your pal with their opposite hand, or rubbing it on wood.

It’s gross, but a bird pooping on you is considered good luck with money in some cultures. Despite the great amounts of birds in the sky, it seems to be rare that people get hit with bird droppings. Your cars, however, are another story.

That’s why some people believe that the birds are a sign of wealth from above that good. Yes, it isn’t very pleasant, but what does it hurt to believe you in something good coming from the experience.

4. Penny on the floor

You’ve probably heard the phrase: “Find a penny, pick it up, all day long you’ll have good luck.”

This coin superstition claims that if you find a penny (or any coin on the ground) that is face-up, you should pick it up and put it in your pocket for good luck.

On the other hand, you have to immediately give away a tails-up coin to get good luck. A coin found with the tails side up is considered bad luck and should be left on the ground.

Money spiders, aka sheet weavers or Linyphiidae, are supposed to be a herald of wealth. This is believed in several places such as the United Kingdom, Ireland, Australia, New Zealand, and Portugal.

It is said that if a money spider is running towards you, it is going to weave you new clothes, which is a great financial fortune. Some people also believe that the spider should be caught and placed in your pocket to receive wealth.

6. Placing Coins On the Eyes of Deceased

Rooted in Greek mythology, coins were placed on the eyes of the dead in order to provide them safe passage into the afterlife. It is believed the boatman on the river Styx, Charon, had to be paid to ferry you across.

There are a variety of New Year’s superstitions and traditions to make you have a prosperous year, here are a few of them:

The number 8 is considered lucky in Japan, China, and other Asian cultures,

In China, this is because 8 (bā) sounds like the word to generate wealth (fā). In Japan, it is considered lucky because of how the number 8 “八” broadens gradually and becomes larger, giving to the feeling of growing prosperity.

Decorating with the number 8 is believed to bring good fortune and prosperity into your home. It is also deemed lucky if this number is found on things such as your license plate, telephone number, or address.

Having money attracts more money. That’s why you should never completely empty your purse or wallet. When giving them as a gift, you should also fill them with a little money in order to bless the recipient with financial fortune.

Here are some other things that bring luck and money: