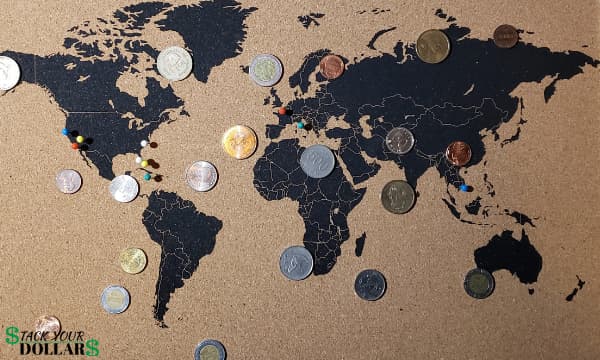 In simple terms, a currency is defined as a form of money that is in use. There are many different types of currency! 180 main currencies of the world are identified as legal tender by the United Nations (UN).

Read more: Learn all about money’s history and how to manage it.

8 Major Currencies of the World

The major currencies are those used often in the foreign exchange market. The 8 most traded currencies are the United States dollar (USD), the Euro (EUR), the Japanese yen (JPY), the British pound sterling (GBP), the Australian dollar (AUD), the Canadian dollar (CAD), the Swiss franc (CHF), and the New Zealand dollar (NZD).

Knowing these exchange rates is useful when planning to travel!

The most traded currency pairs in the world, according to the Forex market, is the EUR/USD.

Though it is not a “major”, the Kuwaiti dinar (KWD) is currently the most valuable currency. It typically trades with the Bahraini dinar (BHD) for the top spot as the most expensive. 1 USD will give you 0.31 KWD. Or 1 KWD exchanges for 3.23 USD. (As of May 2020)

Every country does not have its own system of money. Countries can declare the currency of another country as their legal tender.

The East Caribbean dollar is the currency used in 6 countries: Antigua and Barbuda, Dominica, Grenada, Saint Kitts and Nevis, Saint Lucia, & Saint Vincent and the Grenadines.

Read More: What Is Money Made Of? And How It’s Made!

This list shows the major currencies in use by every country (and some territories) with their ISO 4217 code and currency symbol.

What types of currency are used in your area?

What are the 8 major currencies of the world

What is the most stable currency in the world?

The most stable currency this year has been the Swiss Franc.

2 thoughts on “Types Of Currency In The World: List With Symbols”