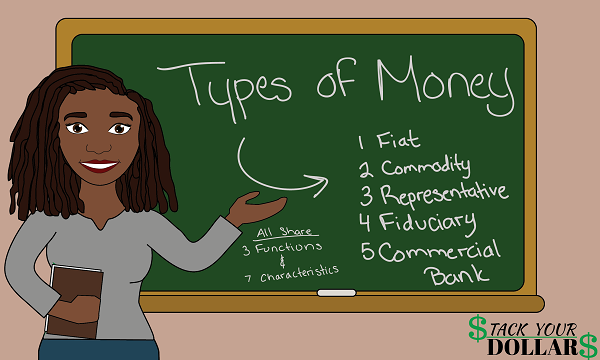 There are 5 different types of money in the world: Fiat, commodity, representative, fiduciary, and commercial bank money. They also all have three functions in common; they serve as a medium of exchange, as a store of value, and as a unit of account.

What is money? In economics, money is simply something generally accepted as a medium of exchange for goods and services (Merriam-Webster). That means that anything can technically be considered money, but the most accepted kind today comes in the form of paper banknotes, coins (metallic money), and credits (backed by banks).

This topic might be a bit “dry”, but I hope you find it very informative.

Related Reading: Not exactly what you were looking for? Here’s a list of the major types of currency in use today.

Money is defined by the three functions (or services) that it provides:

1. A Medium of Exchange

The main and most important function of money is that it can be used in the exchange of goods and services. As a widely accepted form of payment, it serves as a medium of exchange that allows those who use it to get what they need easily.

Without money, people would have to use the barter system. In this system, people exchange goods and services with one another. It’s a good system if both parties hold what the other wants, which is called a double coincidence of wants. For example, if I wanted to exchange a luxury car for a used speed boat with someone, we would both walk away happy.

However, the problem comes in when the individual does not have a good or service that the other values for the exchange. Example: What if I wanted to buy your car for 10 cows and a couple of chickens? I’m guessing they wouldn’t be taken as payment.

Serving as a unit of account, money acts as a common standard for measuring the value of goods and services. It’s consistent and allows you to easily compare the worth of a $1 soda to a $50 chair. On the other hand, if I had to pay for the soda with pencils, and the chair with apples, it’d be harder to understand their values.

With money as a common measure, it’s easier to quote and bargain prices.

Money must also serve as a store of value, meaning that it retains its worth over time. It should be able to be saved, stored, and retrieved while still being viable as a reliable medium of exchange. If I sold a bunch of chairs for apples, I would not be able to “Stack My Apples” and continue increasing my wealth. Over time, they would be worth LESS when they’re getting soft, and WORTHLESS when spoiled.

However, one could argue that money does not really “store value” either due to the fluctuating purchasing power with inflation.

Read More: Some economists argue that there are 4 functions of money. Learn more about it in my other post.

Throughout time, there have been various forms of money from seashells and seasonings to banknotes and debit cards. Currently, fiat money is the money type being used.

Fiat money (fiat currency) is money whose value is not based on its inherent value but is based on an authoritative decision (fiat) by the governing body. The government declares it as legal tender and it must then be accepted as a form of payment everywhere. Due to not having an intrinsic value, a partially destroyed bill can be replaced by the Federal Reserve Bank. On the other hand, commodity money can not be.

Related Reading: What Is Money Made Of? And How It’s Made!

Unlike fiat currency, the value of commodity money is intrinsic; its value comes from the commodity it is made from. If the money is destroyed, it cannot be replaced. It is also probably the earliest form of money. These commodities are used as a medium of exchange and gain their value from the scarcity of the items. The use of this type of money is like using the barter system where goods and services are exchanged for the like. Unlike the barter system, using commodity money functions as a unit of account that allows you to compare the worth of goods and services.

Representative money, like fiat money, has no value of its own. Unlike fiat money, it is backed by a commodity. As a commodity-back money, it could be exchanged for precious metals (like gold) held within a bank vault. It was easier to carry a certificate around rather than a chest full of gold.

Deriving from the Latin word fiducia, to trust, fiduciary money works on the promise and trust that it will be exchanged for fiat or commodity money by the issuer (bank). People are not required to take it as a form of payment because it is not a government-ordered legal tender.

Some people don’t know how to write checks anymore, here’s a post detailing parts of a check and how to fill it out.

Commercial money (also known as demand deposits) is a claim against a bank for the purchase of goods and services (through the means of withdrawing in person, check, ATMs, or online banking). It is a debt-created currency by the bank. They create more money through a process called fractional-reserve banking. In this, only a certain percentage of money the bank “has” is held within it. The other percent is given to others in the form of loans, in doing so, the bank makes back more money from the interest and fees charged to customers.

In short, the bank is loaning out the money you deposit to give others debt and create more money from the interest placed on it.

All in all, the main form of money used in economies today is fiat money; it has no value except that of which is ordered by the government. What matters is that all types of money functions as a medium of exchange, as a store of value, and as a unit of account.

Related Reading: Want to learn more? Read more about what money is, its history and money management skills.

10 thoughts on “The Different Types Of Money”