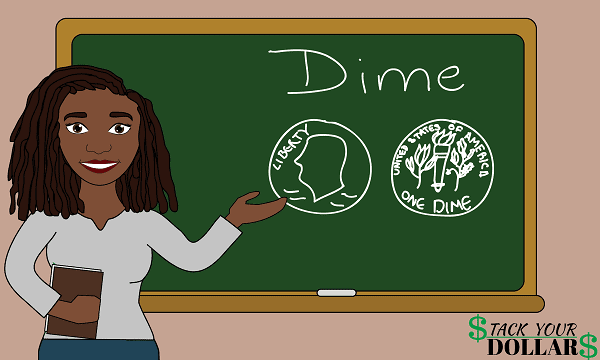 The smallest of the U.S. coins, a silver metal valued at 10-cents, is inscribed with the words, “ONE DIME”, but that’s not it’s original name. It used to be called the disme!

The use of this coin was first authorized by the Coinage Act of 1792. It has featured designs of the female figure of Liberty in various poses.

Since 1946, the dime’s design shows Franklin D. Roosevelt facing left. After his death, it was decided to honor Roosevelt this way due to his support of the March of Dimes for three decades.

The other characteristics of the 10 cent coin include:

Front of the Dime (aka heads):

Back of a Dime (aka tails):

Though it is the smallest coin in diameter, width, and weight, it is not the least valuable.

Who sculpted the dime?

The design on the obverse is credited to the engraver, John Ray Sinnock; however, it is believed that he was inspired by the relief sculpture of President Franklin D. Roosevelt by Selma Burke.

Ms. Burke is an African-American sculptor who won a national competition for the commission of the sculpture. Only 2 of the 3 requested live sketches were completed before Roosevelt’s passing.

What is a dime worth?

The “ONE CENT” coin, also known as the penny, is larger than the dime, but is worth less than it. A dime is worth 10 cents.

The dime is so small because it was originally made of 1/10th of the silver in a dollar bill. Thus, ten of them make a whole dollar.

Why is 10 cents called a dime?

Originally, a dime was called the Old French word “disme” meaning tenth. It derives from the Latin term “decima”. The name fits because a dime is 1/10th of a dollar. Eventually, the “s” was dropped and it became the dime.

What is a rare dime?

Check your piggy banks! There are various other coins in circulation that could be somewhere in your home! These dimes worth money could make someone rich!

There are different types of currency in every country and they each have a different worth. In other countries, a dime would equal other amounts.

10 thoughts on “One Dime: Coin Value And History”