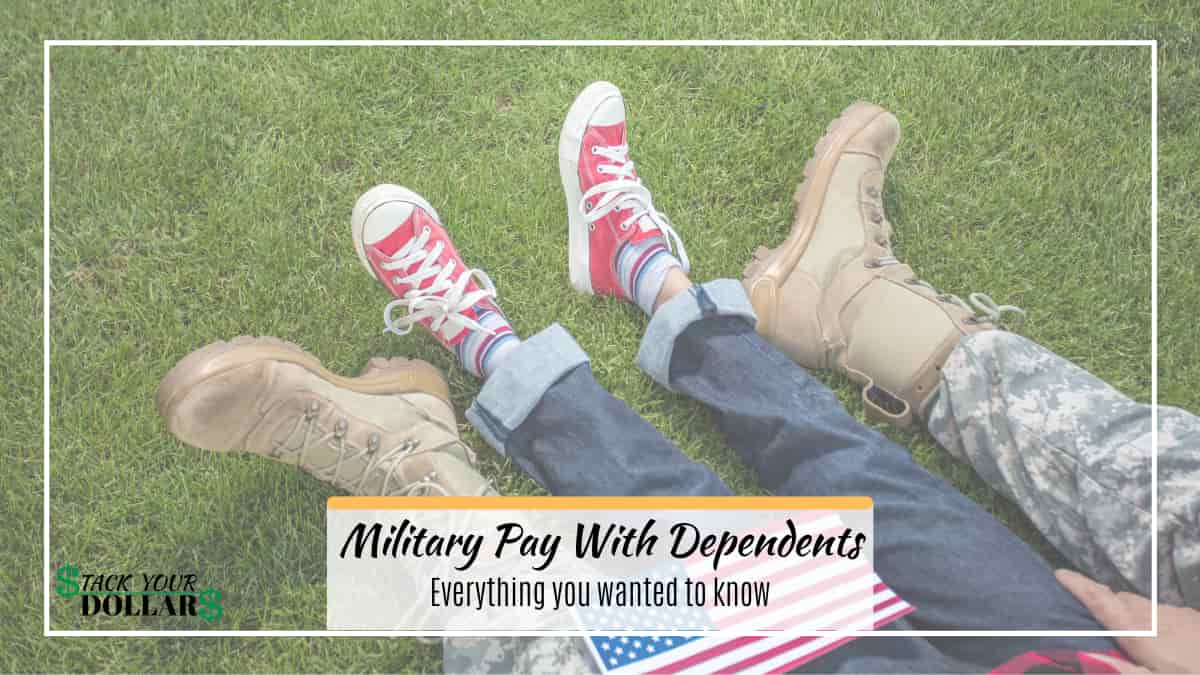 Many people have heard that personnel with dependents in the military get increased pay. While that is true, exactly how that works isn’t widely understood.

First off, what is a dependent? You are automatically considered the dependent of a military service-member if you are their spouse or child. You may also apply for adult family members (parents, siblings, in-laws) to be considered a dependent if you provide more than one-half of their monthly living expenses. (View more information on secondary dependents.)

Another thing to understand is that Military pay is made up of three main components:

Basic pay rates are determined by rank and years of service, while BAS is based on the status of Officer or Enlisted. The only allowance that having dependents affects is the BAH rates.

Learn more about military pay and allowances (plus the current pay calendar).

Now that we’ve covered the basics, here are the answers to some commonly asked questions.

TIP: You can also get a copy of my FREE military family budget worksheet to get a better handle on your finances!

1. Does military base pay increase with dependents?

No. Military basic pay is only based on rank and years of service. You can check the official military pay chart on the link to see exact amounts.

2. Does BAH increase with dependents?

Yes. Your BAH does increase with dependents, but only the first one counts (spouse or child).

3. Does military pay increase per child?

No. The only rates are “BAH with dependents” and “BAH without dependents”; It does not increase for every additional child/ dependent.

On another note, COLA does increase based on family size. COLA is an allowance given to offset the high cost of non-housing goods and services when stationed overseas (or in Alaska & Hawaii).

4. Do you get paid more if you are married in the military?

You do not get increased basic pay or a special “military marriage pay” for being a married military member; however, you will get increased BAH. This will only happen if you are not already receiving “BAH with dependents” for another dependent.

5. How much do you get for a dependent in the military?

6. Is Bah based on where you live or where you are stationed?

BAH is based on the zip code of the military member’s duty location. It does not change based on where they actually choose to live and whether or not they are on deployment.

7. Do you get BAH if your spouse lives in another state?

Yes. You will get BAH for a spouse when geographically separated, but you will have to use it to cover any housing costs the two of you may have at these separate locations.

The BAH amount will be based on the duty location unless the service member applies to be a Geographic Bachelor or is on Unaccompanied Orders.

8. Do military spouses get paid?

Wouldn’t that be nice? But no, they don’t. Unless the spouse is in the military, such as dual military, they will not get paid. They are able to seek employment, and there are even military spouse-owned businesses.

9. How much is dependent pay for military?

There is no military dependent pay. The only thing that having dependents affects is the housing allowance, COLA, and Family Separation Pay.

3 thoughts on “Do You Get More Military Pay For Dependents? Yes, But Not Exactly.”