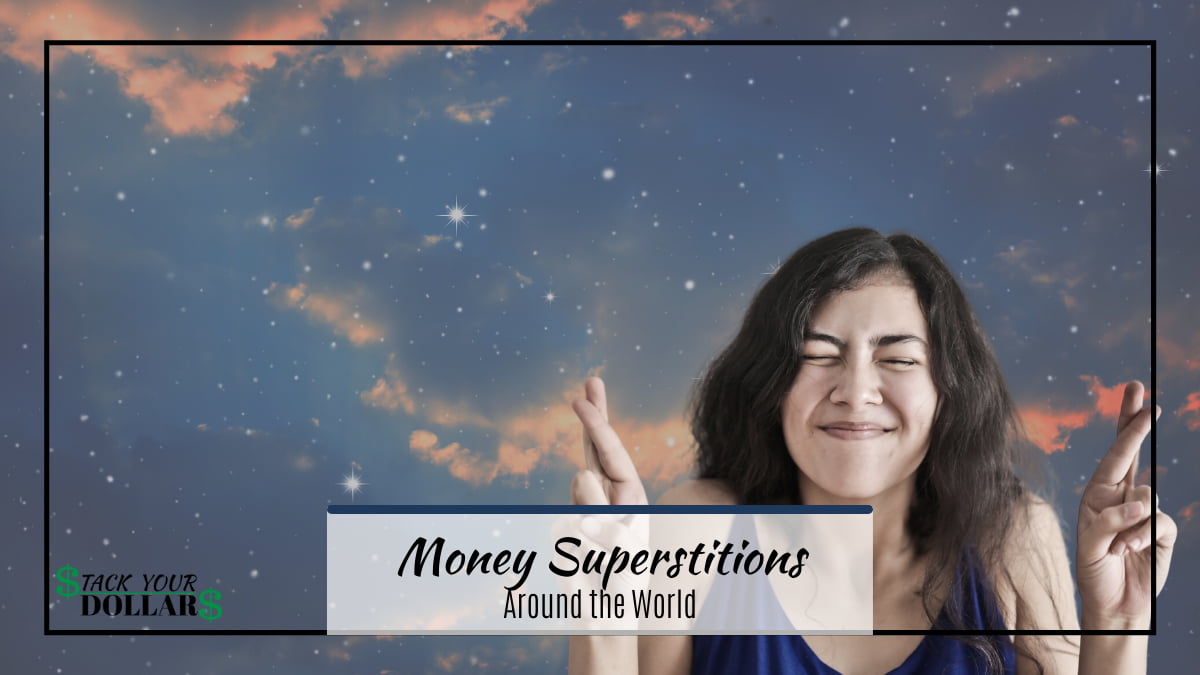 Many cultures around the world have different superstitions about luck with money. Some of these money beliefs bring good luck and others bring bad luck.

I’ve asked a few people to share their traditions surrounding wealth and prosperity. Here are the superstitions around the world that they shared:

1. Eat all of the bread crumbs

Growing up in Israel, I was told that eating all the crumbs from your bread (making sure none is left over) would make you wealthy. We would scoop up all the crumbs that fell on the table and eat them! – Robyn from A Dime Saved

Growing up in Hungary I was told that if you want a prosperous year you have to eat lentils on the first of January. The number of lentils you eat equals the amount of money you can expect – Emese from My Pure Plants

3. Hide a silver sixpence coin in the Christmas pudding

Growing up in the United Kingdom, I was always told that if you found the silver sixpence in your piece of the Christmas pudding (a sixpence was traditionally placed inside the pudding mix) then it was a sign you would be prosperous and enjoy wealth and good luck in the year ahead. – Lucy from LB Health & Lifestyle

Growing up in Nigeria, I was always told that picking up money from the floor (that didn’t belong to you) will turn you into a goat! This superstition is so rife in Nigeria that it’s seen in many movies. – Gloria from Mums Invited

(This superstition about finding money on the ground varies in different places. In Guadeloupe, it is also a curse and people throw coins out to get rid of worries and the evil eye. However, in Jamaica, it is good luck to pick up coins if they are facing “heads” up..)

5. Throwing coins in a fountain

Growing up in the United States, I was always told that if I threw coins in a fountain, I could make a wish that would come true. – Alice from Mommy to Mom

6. Go into the New Year with coins in your pocket

Growing up in the Philippines, I was told that every New Year we must put coins in our pockets and shake coins with our hands or piggy banks to have a prosperous year and also jump. – Jeannie from therunningbaker24

Growing up in the Czech Republic, I was told that a scale from a Christmas fish placed in your wallet will bring in a whole year’s wealth.

Czechs traditionally eat carp, a fish caught in Czech ponds, for Christmas dinner. And the scales from this Christmas fish are a sought-after souvenir for prosperity throughout the coming year! – Petra from Cook Like Czechs

Growing up, one lucky thing I learned about was that an itchy left palm means money coming into your life. My Jamaican mother would always ask me to scratch her palm with my right hand to increase the luck for money. – Martina at Stack Your Dollars

1 thought on “8 Money Superstitions Around The World”